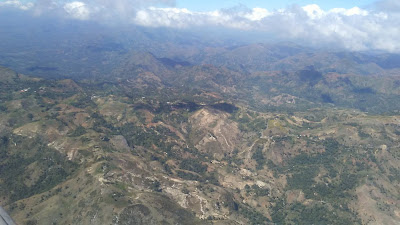 Hannah, the midwife I am travelling with, and I arrived at the Cap-Haitien airport yesterday (Friday) afternoon.  I think I may have had a touch of the "bug" that Chuck, my husband, and my children had over the last few days, so the trip was off to a rough start.  I was very thankful that on the second flight, although I had a center seat, the three seats across the aisle were totally empty.  I moved to the window.  I had beautiful views the whole trip, and looking outside helped keep me from feeling too nauseous.  I am thankful for the prayers of my family and friends, and for Dramamine as well. 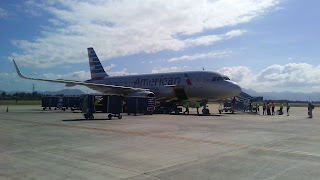 The Cap-Haitien airport was very basic, and we got off the plane just like in the movies -- right onto the tarmac.  I always wanted to disembark that way.  I remember being very disappointed the first time I flew as a teenager because we had to walk through a tunnel.  I was, however, glad for the tunnel when we left Indianapolis yesterday with the outside temperature hovering at 0 degrees. 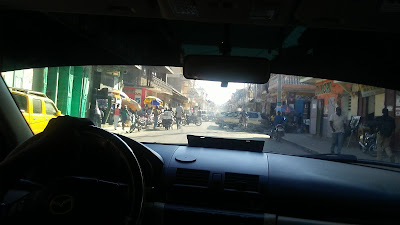 Cap-Haitien is a large and bustling city.  It takes a while to get anywhere in a car because there is so much traffic.  There was plenty of time to listen to the radio and watch all of the activity going on around us.  A church service was on the radio.  I couldn't understand anything, but got blessed just listening to all of the shouts and "amens" that could be heard in the congregation wherever the sermon had been recorded.  Then they sang "There's Not a Friend Like the Lowly Jesus" (in Creole, of course).

As Hannah pointed out, the drivers are amazing, weaving in and out of traffic.  Motos (like minibikes) are very popular and they do even more dancing around the bigger vehicles.  The population is 250,000 in Cap-Haitian alone, and the city has poor sanitation.  Besides the smell of diesel in the air, there is often the smell of sewage, and there are piles of garbage everywhere.


Mama Baby is in Vaudriel, a suburb of Cap-Haitien.  It isn't so crowded here, and is relatively quiet unless the restaurant down the street is playing music at night.  I did hear one song in English, "Wonderful, Merciful Savior".  More of that, please.  Anytime.  Any language.

I was amazed at how much energy I had when we arrived, after being up almost an entire night (only had an hour's sleep), and not making up much of what was lost.  I didn't think I would be attending any clients at the birth center right away.  But late yesterday evening, Hannah and I went down to check on a mom who had been in labor all day to give the on-call midwife a little break.  It was this precious young mama's first baby, and she was so very tired.  She had been walking and walking, trying to get the baby to come.  She got some rest while I massaged her back. She loved the massage, and grabbed my hand and put it to her back during each contraction to ask for more.  She dozed between her labor pains for a little while, then the midwife on-call encouraged her to walk again.  I learned that her baby was born around 1:00 a.m.  The friend who brought her had already taken her home by morning. 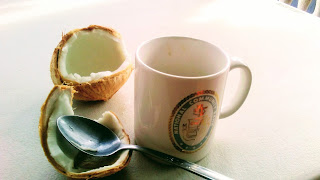 Breakfast was fresh coconut and coffee.  The groundskeeper chopped down the coconuts and cut away the outer husk at dawn, I am told, because he knew that Hannah liked them so much.  They are taking good care of us here. 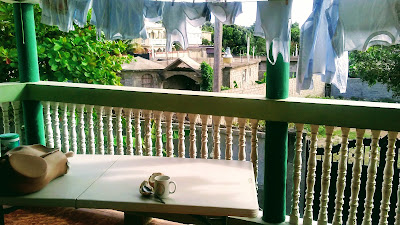 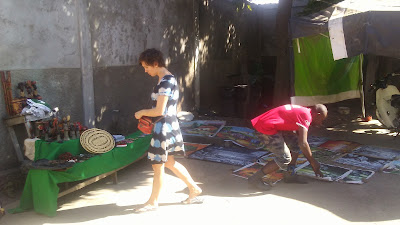 The day has been low-key.  An artisan, and astute businessman, Rony, came to set up shop in the courtyard of Mama Baby, just because he heard that we would be here.  He remembered Hannah from last year, and he comes whenever there might be an opportunity to sell some of his beautiful art.

This afternoon, we got all of the supplies that were donated organized and put away with the help of Alourd, one of the Haitian midwives. 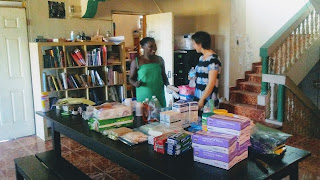 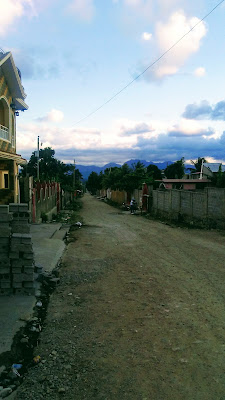 Earlier I heard what sounded like a marching band in the distance.  I asked Hannah, "Do you hear that?!?"  She listened for a moment, and said, "It must be a funeral procession".  We ran down to the street and sure enough, the procession went right past where we were standing.

Day one has been interesting, beautiful, and relaxing.  I am thankful that we get to enjoy the weekend before the clinic opens on Monday.

I am a follower of Jesus. My husband and I have 6 children. Our oldest is officially an adult, and our youngest is 4.

The "ordinarily divine" life is one that I actively seek. I have a passion for Jesus. I am in awe of God, who wants to saturate the earth with His Spirit.

My life in the Lord has taken me down some unexpected paths, which include: having a large family, homeschooling, working with women in the childbearing year, ministering through music, and most recently travelling to Haiti.

I never cease to be amazed at how the Lord "expands my territory" in ministry to others, and how our callings do not necessarily reflect our perceived strengths.

I pray that my journey will inspire you to seek a Divine connection in the ordinary-ness of your life!

All for Jesus,
Melissa